Margaret Court was the most glittering example of Australia’s domination of world tennis in the 1960s and 70s. Check out in this article.

Court is one of only three players in history (all women) to have won the “Grand Slam Boxed Set“, consisting of every Grand Slam title (the singles, doubles and mixed doubles). 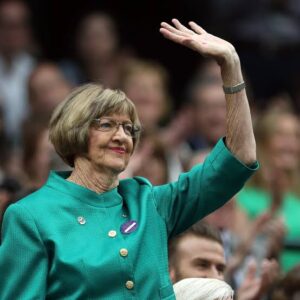 Court, however, is the only one in tennis history to complete a Multiple Grand Slam set, twice, in all three disciplines. Uniquely, she won all 12 as an amateur and then after a period of retirement, returned as a professional to win all 12 again.

Court is also one of only six tennis players ever to win a Multiple Grand Slam set in two disciplines, matching Roy Emerson, Martina Navratilova, Frank Sedgman, Doris Hart, and Serena Williams. She also won the Fed Cup with Australia on four occasions.

The International Tennis Hall of Fame states “For sheer strength of performance and accomplishment there has never been a tennis player to match (her).”

In 2010, the Herald Sun called her the greatest female tennis player of all time, a view supported by Evonne Goolagong Cawley.

It would be so much easier to honour Margaret Court if she was a stereotypical 77-year-old granny. But she isn’t. 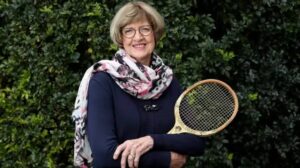 The Australian sporting icon has repeatedly voiced homophobic opinions and her objection to same-sex marriage.

Decades ago she said she was impressed by South Africa’s apartheid regime, a rotten statement that appears never to have been fully disowned.

But Court is also the most successful grand slam champion in tennis history. Half a century ago she became the first woman in the open era to win all four major tournaments in a single year. Court is an epochal figure in all of sport.

So last week she was honoured at the Australian Open in an anniversary ceremony that wound up shining a spotlight on the conundrum of whether the player can – or should – be separate from the person. 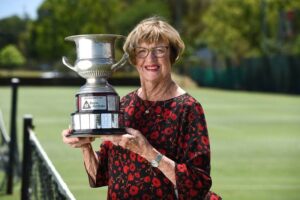 They demanded that the Australian Open tennis arena in Melbourne named after her is rebranded to honour another local, Evonne Goolagong.

Martina Navratilova has accused Margaret Court of being “a racist and a homophobe” after the former Australian tennis champion said tenniswas “full of lesbians” and transgender children were the work of “the devil”.

Navratilova, who married her partner, Julia Lemigova, in 2014, has led calls for the Margaret Court Arena at the Australian Open to be renamed following the 74 year-old’s latest controversial comments.

In a open letter to the arena, the 18-time grand slam singles title-holder wrote that sporting venues should be named after athletes not just for their achievements on the court but “also for who they are as human beings”. 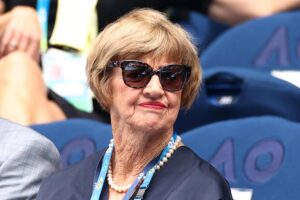 “It is now clear exactly who Court is: an amazing tennis player, and a racist and a homophobe,” writes Navratilova. “Her vitriol is not just an opinion. She is actively trying to keep LGBT people from getting equal rights (note to Court: we are human beings, too). She is demonising trans kids and trans adults everywhere.”

Navratilova’s call for the arena to be renamed is supported by openly gay Dutch player Richel Hogenkamp, while the world number-one player Andy Murray hinted this week that players could organise a boycott of the Australian Open in January if the issue were not resolved by then.

Asked if he would support a boycott, Murray said: “It’d be more beneficial to do something before the tournament. If the players come to an agreement – if they think the name should be changed or whatever – that should be decided before the event starts, but I would imagine a lot of the players would be pretty offended by that.”

More than 5,000 people have signed an online petition calling for the stadium to be renamed.

No comments to show.